The excitement was building the week before the 2015 John Moyle Field Day as I planned to participate in the 6 hour single operator VHF/UHF section of the contest.

This would be only the second time I had participated individually in the contest, having operated from Kinglake in 2012 and surprisingly winning this category.

Naturally I was seeking to win this section again, however given some antenna limitations this year the aim for my participation was not to win but to test some antenna equipment for future portable applications.

Since my last participation the portable “kit bag” has improved considerably, given my continued participation in Summits Of The Air (SOTA) activities.

The gel-sell battery has been replaced by a Lithium-Ferrite battery, with a capacity of 8.4Ah. This was sourced from Hobby King and is perfect for the Yaesu FT857D as its nominal battery voltage is 13.2V.

A suitcase is now been deployed to house my FT-857D, speaker, straight morse key, and power supply (for bench testing and mains operation). This is a very robust configuration which has been tested by airport security screening and four interstate flights. 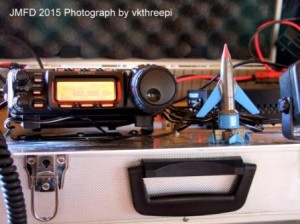 The Yaesu FT-857D, speaker and accessories mounted in a secure aluminium case. Thunderbird 1 is always optional……

Antenna systems have also evolved from a home brew (and heavy) 6 element 2m Yagi with a similarly heavy UHF beam to light weight Arrow beam antenna’s, one for VHF and one for UHF. The Diamond X50 VHF/UHF vertical was also packed, together with a PAR horizontal loop antenna for 2m and an individual horizontal loop for UHF.  Unfortunately my portable checklist failed to identify that a second N type male to SO239 female adaptor was required so the UHF loop could not be deployed. Duly noted and portable list amended.

The location chosen for the portable operations was on Private property near Myrniong, west of Melbourne and east of Ballarat, at Grid Locator QF22EJ. The property owners were happy for me to use their patch of land and were rather intrigued with me operating by myself and setting up a boot load of equipment and antennae.

Unlike 2013 and 2014 the weather conditions were brilliant and both the set up and dismantling of the station was conducted in clear conditions, sun shining then setting with a hint of wind. The location itself is around 790 metres high and has an excellent take-off in an arc extending from the east to west. The north west to north east arc has some geographical obstacles hindering a clear path and subsequently limited stations on those bearings were heard. 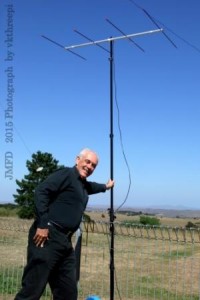 “The Man in Black” Ian, VK3QL, shows me how to make his Buddipole mast stable. I appreciated the loan of this equipment and I am so impressed with it that I have purchased one.

So what of the contest?

The JMFD is a great chance to catch up with other amateurs you have known for years and be introduced to some “newbies”.

It was great to have a QSO with Peter VK3BFG in the eastern suburbs of Melbourne (ATV king), Paul VK3DIP (portable as a home station or was that home station portable?) and Ralph VK3LL operating under Damien VK3KQ’s callsign, to name a few.  WANSARC club members in Frank VK3OP, Lou VK3ZLD, Don VK3HDX and Frank VK3ZO popped up for a chat and swapping of numbers

So what were the highlights of the day?

At the outset I most enjoyed experimenting with the antenna set up, particularly on 2m as I had a 3 way coax switch in line with the rig which enabled me to switch between antennae to give a very quick appraisal of signal strength variations.

Of interest was the fact that the PAR horizontal loop consistently was 1 “S” point on the 4 element beam antenna, however in perspective the beam may not have always been pointing in exactly the right direction as the “Armstrong” method required me to bound out of my chair and manually rotate the antenna to where I thought the signal was coming from. 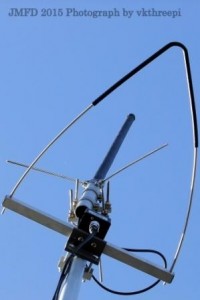 The Diamond X50 antenna operated well in the 144 SSB section of the band and also above 146.450 simplex, however the same cannot be said for its performance on 70cm. Its performance characteristics are certainly tailored for the 432MHz SSB section of the band as at 439MHz the SWR was relatively high. I guess it is not surprising given the antenna would favour JA band plans at the lower end of 70cm.

It was interesting to note that stations running a vertical in Melbourne were difficult to hear on the Diamond X-50 however I could hear them OK with the loop. Normally one would expect about 20dB difference in signals due to polarization but over the distances involved (50 – 70km) perhaps the polarization did not matter to much over the path from a Melbourne station to me.

In terms of points for the contest the highlight was a contact with Joe, VK7JG from Launceston. Joe called me on 144.160 and I nearly fell off my chair. He was 5×6 to 5×8 with some QSB and I was 5×5 with the contact lasting about 3 minutes. Have to love QRP!! My beam was certainly doing a better job than the loop however the loop was only “1” S point down. Joe reported that my signal on the loop was quite readable but down on the beam, so the path was consistent both ways.

I did miss having an antenna for 6 metres and was disappointed to not trial the 6m loop from PAR. All intentions were to build a portable 6m beam antenna for the day but this was but a dream. I did consider taking the Diamond V-1000 triband vertical (6/2/70) however I have tested two of these and the SWR plots are not spectacular. I think some serious modifications need to be made to the base of the antenna to improve the performance on 6m so this is another project on the list. At this stage the antenna is more suited to be a dual band antenna than a tri-bander. Pity really.

Could I have secured more points in the contest?

Probably, but the aim of this year’s event for me was to test some new equipment and antenna configurations, test portable capabilities and compete in the contest.

It was a magnificent sight to be on one of the highest points in the area with the sun slowly sinking in the west after a glorious day, the mingling of darkening blue skies a contrast to the warm orange glow of the sinking sun.

There are always lessons learnt from portable operations and this was no exception. Improvements for next year: 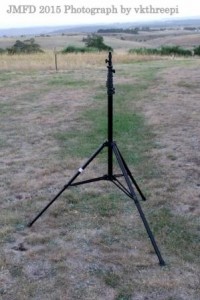 The “Buddipole” mast and tripod sits proudly taking into the magnificent view. So impressed with this kit looking forward to receiving my very own one.

So now to the task of writing up the logs and submitting these to the contest Manager. Incidentally, call me old fashioned but paper logs still work for me. Some of the stations I worked stumbled with their contest computer programs through a variety of reasons – no thanks. Happy to use a pen.

Do I expect to win in the section I have competed in?

No, not really. It is always hard to judge what will be a “winning” score as it is often difficult to gauge how many stations are actually participating in the contest. I actually thought numbers were down, however I was operating from a location remote from Melbourne so the “capture” area for me may in fact have been smaller than had I been operating on the very outskirts of Melbourne.

There is something satisfying about operating portable in the open air, knowing that the success of your station operations is solely on your head. The fact that I combined QSO’s with experimentation was a bonus.

Will I be back next year? Of course. 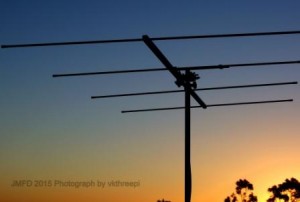