The Sydney to Hobart yacht race is held every year, commencing on Boxing Day (December 26).

Race distance is 628 nautical miles  with one of the challenges being the often unpredictable weather, particularly in Bass Strait.

The 1998 race was the most disastrous in race history, when 6 sailors died and 5 yachts were abandoned at sea. 115 yachts started the race in Sydney Harbour – only 44 completed the race. 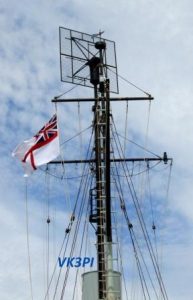 A record 66 yachts retired from the race and 55 sailors were airlifted to safety by military/civilian aircraft and Royal Australian Navy vessels.

Race rules and crewing requirements have been significantly tightened since that fateful race. Thankfully the communications procedures have also improved, as during the 1998 race the radio oprators on the radio relay vessel were overwhelmed with the number of vessels in distress and did not manage the volumes and severity of radio traffic requests well.

All competitor boats must have their radio communications equipment inspected, including  their Emergency Positition Indicator Beacon (EPIRB). They must also have personnel that possess a Marine Radio Operators Certificate of Proficiency (MROCP) or higher.

All boats must be capable of transmitting and receiving on at least the following frequencies:

6516 KHz is considered to be a secondary race frequency and will be used as directed by the radio relay vessel “JBW”.

If you don’t have a traditional HF radio capable of listening to race information, then why not use your PC to access one of many Software Defined Radio (SDR) receivers scattered around Australia?

A list of world wide SDR receivers can be found at https://sdr.hu/?top=kiwi

The list is random however you can sort by location by putting AUSTRALIA into the “search receiver” window and clicking the magnifying glass icon on the right hand side of the window.

Following is a list of Australian SDR receivers that may provide good reception of race transmissions:

Generally the very fast boats will finish the race in a couple of days, with most docked in Hobart well before New Years eve.

If you want to view the position of yachts, the following URL will lead you to a race tracker: