Noise levels, particularly on High Frequency (H.F) are becoming increasingly severe within the confines of suburbia with the proliferation of consumer products generating more and more noise. Even on VHF the simulcast paging networks for emergency services have raised the noise floor considerably and if you are lucky enough to have a high VHF location, the downside is that you “see” more sites and hear more signals than most.

One of the best methods to avoid such noises, aside from RF shielding your entire property, is to go portable – out into the clean air, the clear skies and a much less noisy radio environment.

Recently my family and I chose Porepunkah as our Easter holiday location, camping on the banks of the Ovens River. 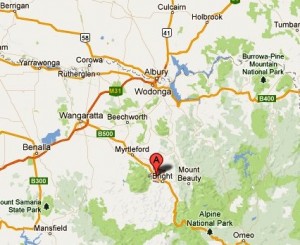 Porepunkah is a small town located on the Great Alpine Road, 6 kilometres north-west of Bright and is the gateway to Mount Buffalo and the surrounding national park. It is situated between Myrtleford and Bright, a pleasant 3 hour or so drive from Melbourne via the Hume Freeway and a cross country drive through Milawa after turning off the freeway just north of where the two McDonalds stores sit like sentries either side of the freeway.

The town has a general store, hotel and a few speciality shops. It is a very picturesque area, surrounded by mountains and a favourite for gliding enthusiasts, both powered and un-powered. In fact a few relaxing hours were spent at the Porepunkah Airport watching gliders being towed into the skies and micro-lights buzzing around like motor mowers on steroids!!

It is always a good idea to keep your portable equipment separate to that which is used on a day to day basis, if you can. In my case you can see in Photograph 1 my basic portable antenna equipment – end fed zeppelin wire antenna for HF with 450 ohm ladder line (1/2 wave on 80 metres in length), a Diamond X50 VHF/UHF vertical antenna and a homebrew 4 element 2 metre beam with 2 lengths of low loss solid copper core cable.

The first duty when setting up the portable camp (after completing orders by the Director of War (XYL) is to determine where the HF antenna is to be deployed. Generally I try to:

The PI Portable location at Porepunkah – food tastes better when camping and so is the radio operating.

In this case I was fortunate in that we had no campers to the south or west of our camp so I was free to run the end fed zepp wherever I wanted, however a straight run for the antenna was not available so I chose to run the zepp in an L shape with the zepp running south west for half of its length then north-north west for the other half. The zepp is a ½ wave on 80 metres using PVC coated multistrand copper wire, with 450 ohm ladder line as the feeder. This is fed into an MFJ Versa Tuner II Antenna Matching Unit (AMU). The zepp loads up on all bands, including 6 metres. On 6 however the efficiency is down to around 50%, but still is useful. One year I operated on 6 metres with the zepp and worked a VK5 for 25 minutes with 10 watts power – not a bad effort. 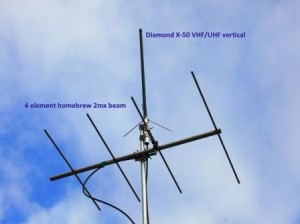 The VHF/UHF setup at Porepunkah – Diamond X50 dual band VHF/UHF antenna at top and 4 element homebrew yagi for 2mx. Pity our location was only 10mx above the ground.

So, how did I go? Well, given my location at around 10 metres above sea level, VHF/UHF was not a roaring success on simplex or SSB, however a number of good contacts were made with Ian VK3AQU, Chris VK3KQU and Phil VK2CPR via the Mt. Hotham and Mt. Big Ben VHF repeaters.

In terms of “local” contacts it was great to catch up with Peter, VK3YE, operating Pedestrian Mobile at Carrum and being heard in Porepunkah with a consistent 5 x 8 signal on 40mx. Peter was running his FT817D with 5 watts and a magnetic loop antenna. Must build one. Then it was like a club net – Ian VK3QL, Frank VK3OP and Chris VK3FY were all solid signals on 40mx. Graeme, VK3PGK, now living in Echuca, was a solid 5 x 9 signal using his 9 metre mast and an end fed antenna. I also worked two SOTA stations, Andrew VK1NAM at Mt. Ginini and Allen VK3HRA on VC-024 to the west of Melbourne, both on 40mx.

The transceiver, microphone and interconnecting cables, together with the AMU and cables, are stored in aluminium cases with foam inserts. This protects the equipment and makes all gear readily transportable. All other cables, HF antenna, hardware and spare ropes are stored and carried in an old army type kit bag. The speaker I use is a refurbished military type speaker made in 1937, which provides a rich, balanced sound from the FT857D.

Equipment is unpacked, set-up, operated and then re-packed each time I operate. This sounds like a chore but in reality takes only a few minutes. All power cables have Anderson plug connectors, including battery leads and power leads in the car. 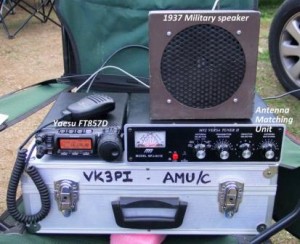 This allows me to either use a standalone battery with solar panel trickle charging or the car battery. When the VHF/UHF antennas are not in use, the coaxial cable tails are stored in a waterproof bag whilst the ladder line feeder for the HF antenna is coiled and stored in a tree to ensure that pedestrians in our camp do not become tangled. Safety first!!

Finally, it is an imperative to make a checklist of all of the equipment required to operate successfully portable, as through bitter experience nothing is worse than heading away, setting up equipment, then finding you have left a microphone and/or morse keyer on your bench. Generally once I have returned from an operation, I re-stow equipment and check all contents so that when I pick up the equipment to operate again it is all there and ready to rock. Happy portable operations!!