The Yaesu FT-7 was first released in Australia in the late 1970’s and proved to be a hit with the then new Novice “N” calls. 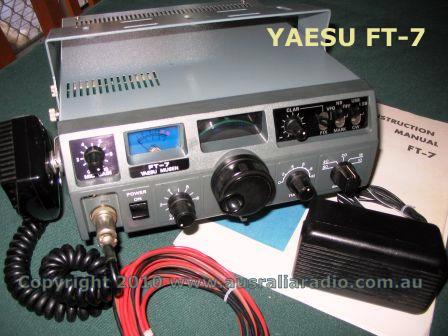 Rugged and simple to operate, the FT-7 was a “no frills” offering from Yaesu, with around 10 watts output.

Additionally for those with a technical mind, the FT-7 was constructed with a series of plug in boards, making fault finding and circuit identification relatively simple, if required.

I can recall I first purchased an FT-7 from Bail Electronics in Box Hill in 1979.  It cost of $379, with an additional $12 for an extra 10 metre crystal.  So exciting to have a “new” rig and the challenge was to operate QRP on HF. It is remarkable to say that the value of the FT-7 has actually increased since that time, with some units, in excellent condition, fetching up to $500.

I still use the FT-7 for portable operations, which fits neatly into an aluminium tradesman type case, padded with foam from Clark Rubber. The FT-7 is transported in one case, with peripherals such as a morse key, power cable, speaker and coaxial patch leads transported in another.

But is a rugged unit and a simple unit to master, running happily from a battery or suitable power supply.

For those that are happy to run QRO (high power), Yaesu produced a matching FL-110 HF amplifier. It is rare to now find one of these units, although I am sure that tucked away in someone’s shed is one of these units waiting to be used again.

And here is a great story from Stuart VK4HDA – “The Yaesu FT-7 was one of the first amateur band transceivers that got me interested in the hobby and steered me into a 40 year profession was a technical officer with Telecom.

I have recently purchased a faulty FT-7 which happens to be my first one and i have given it an overhaul and it works great. It was sold to its original owner in Sydney through Dick Smith back in 1979.

The local high school had one back around 1982 and some of my school mates had VK2 N Calls and ran a net on 3575Khz.

I have worked into New Zealand on 20m recently with a long wire and a home made power supply.

Looking forward to getting back on the air with it, it feels like owning a great old car from the era as well”.

Thanks Stuart – many thanks for your contribution. I look forward to working you sometime FT-7 to FT-7!