Members were very impressed with its size, performance and value for money.

The following is a reprint of an article created by Greg outlining his experiences with this radio.

A recent break in Northern Queensland offered among many things the opportunity to explore the radio spectrum from a new and electrically quiet location.

Only a very limited amount of luggage space was available so after some investigation a Jaycar AR1780 pocket World Band Radio was purchased and duly packed into my carry-on baggage. 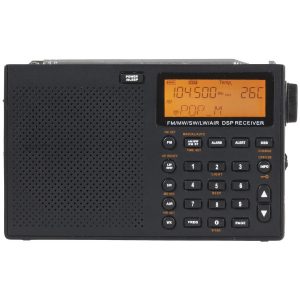 The AR1780 has only been released fairly recently and covers the AM and FM broadcast bands along with most of the HF spectrum. It also covers the Longwave as well as the Air bands. The receiver uses a DSP chipset which provides multiple selectivity options as well as USB and LSB reception in addition to the usual AM mode. The tuning is fully synthesized with coarse and fine rotary knob tuning options as well as direct keyboard frequency entry and memory storage.
There are several reviews of this radio already available on the net which quite comprehensively cover its capabilities, limitations and quirks. Anyone contemplating
purchasing one of these receivers would be well advised to investigate these reviews. I won’t attempt to duplicate too much of what has already been covered, but for what it’s worth here are my thoughts and observations on this little radio after using it for a few weeks in both a relatively quiet remote location and in an urban environment.
Size
My overwhelming first impression of this radio was the compact size for such a wide
range of features and frequency coverage. It measures just 15 x 9.5 x 3cm including the telescopic antenna that folds across the top of the case. This proved to be ideal for travelling with space as a premium. It also sailed through airport security without anyone raising  an eyelid.

The performance on the AM and FM broadcast bands is good. It is very sensitive on both bands and the synthesized tuning makes finding a station on a known frequency or tuning across the band a breeze. It uses a built in ferrite antenna on the AM broadcast band and the variable DSP bandwidth can be narrowed to good effect to help pull in the weaker stations or widened to enhance the fidelity of the stronger locals. The FM band supports stereo operation via headphones as well as FDS  which works well.
Shortwave
Shortwave coverage is from 1711 kHz to 29999 kHz in 1 kHz steps. The main rotary tuning control on the side of the radio can be set to 5kHz or 1 kHz steps and there is a fine tuning control that primarily comes into play for SSB operation but can also be used for AM. The receiver mutes briefly between each tuning step which can become quite annoying when casually tuning across larger sections of the shortwave spectrum but direct frequency entry and memory recall of various frequencies is easy and convenient.

The up/down tuning buttons on the front panel can be used to jump in 5kHs steps and also provides the ability to automatically tune to the next strong station however this feature only operates in the international broadcast bands and skips over intervening frequencies. Tuning in SSB signals with the fine tuning control is very easy and the stability of the radio in SSB mode is excellent.
The radio uses the inbuilt telescopic antenna for the entire shortwave band. Below about 3MHz this antenna probably isn’t long enough and the set seems a bit deaf. On 80 metres and above the sensitivity with just the telescopic antenna is good. An external antenna jack is also provided and connecting 5 to 8 metres of wire to this jack provided a significant improvement in performance, particularly on the lower frequencies.  With this setup and from a quiet location I was easily able to copy amateur SSB & CW contracts from Europe, the USA, Japan and New Zealand on 40 and 20 metres during the late afternoon and evening.
Longwave
Longwave coverage is from 150 kHz to 450 kHz. The radio appears to be quite deaf
operating in this band and only a few of the stronger aeronautical NDBs could be heard. No doubt having this band available would be useful if travelling to Europe but in Australia there is little of general interest in this part of the spectrum so the poor sensitivity is not such a loss.

The Air band covers from 118 MHz to 137 MHz in the AM mode. The sensitivity seems good using just the telescopic antenna. Adjustable squelch is provided along with a one-time band scan function.

Power
The radio is powered by four AA batteries. I used quality alkaline batteries and they are still going strong after a few weeks of regular use. One point to note is that even when turned off, the radio still uses about 0.12mA to display the inbuilt clock and temperature reading. This shouldn’t affect battery life if the set is in regular use but it would be wise to remove the batteries if the radio is put into storage for any length of time to prevent the possibility of the batteries discharging over time and leaking.
Other Features

Summary
I think this radio is aimed squarely at the traveller who wants to stay in touch from
wherever they are. It does have its quirks and limitations but uses up to date DSP and DDS technology to provide surprisingly good performance and features in a quite a compact package. The standout feature for a radio in its price class is the inclusion of a good SSB detector making it useful for monitoring HF ham band activity. Air band access is also a bonus. The radio appears to be exclusive to Jaycar.

I was lucky enough to purchase mine on special for a significant discount.

Am I happy with it?   Yes!
References